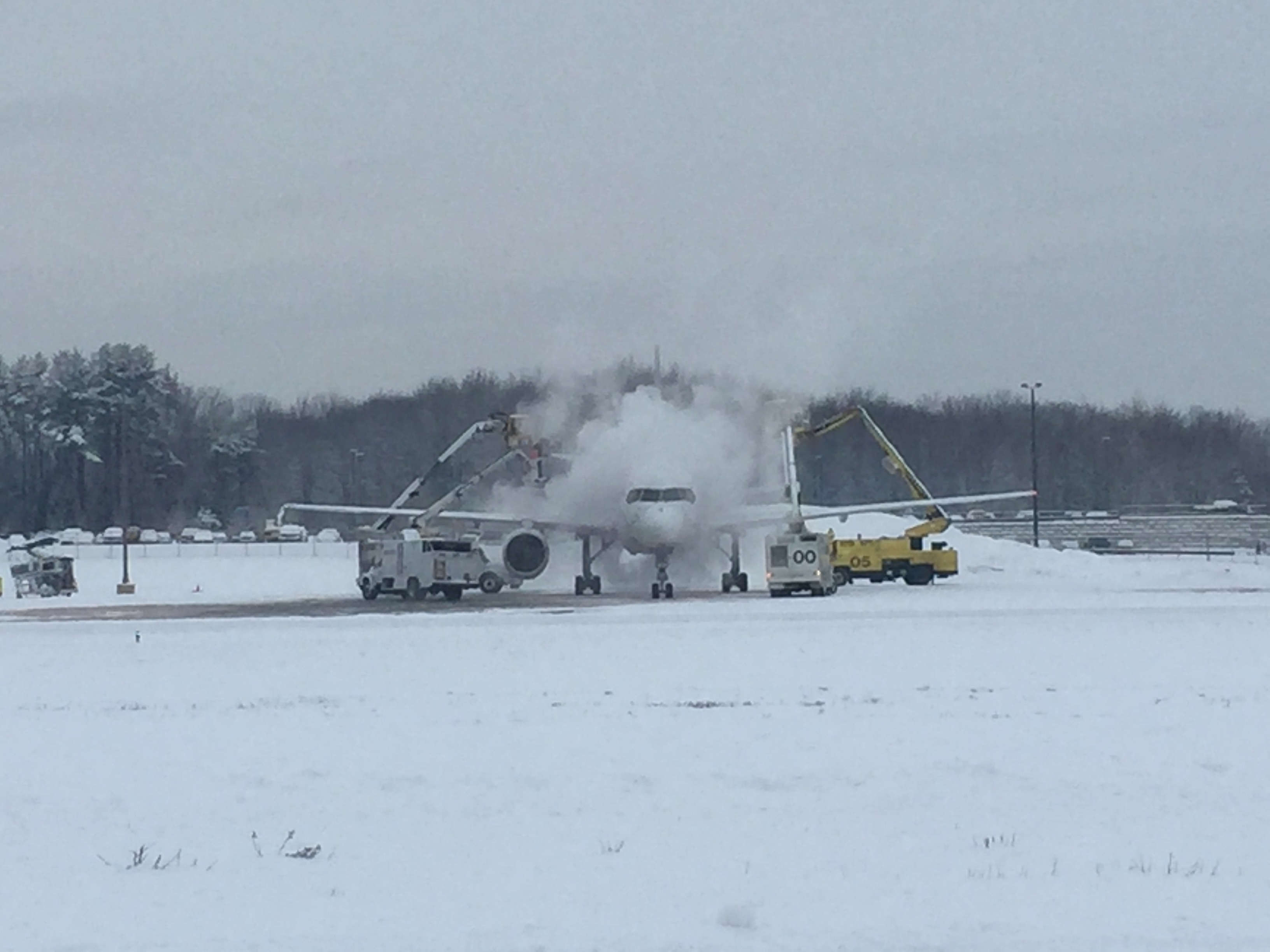 Portland, Maine – With today’s snow event the Portland International Jetport (PWM) is noting its status as the first airport in the United States to use 100% Recycled Aircraft De-Icing Fluid. The new fluid provided by Jetport partner Inland Technologies and applied by Northeast Air meets all FAA safety requirements and is an outcome of a very sustainable and innovative business partnership.

“We are excited to report the Jetport is now using 100% recycled de-icing fluid for aircraft deicing. This is the culmination of three years of preparation by Inland Technologies and Northeast Air” said Paul Bradbury, Airport Director. “For the past six years we have captured the Aircraft De-Icing Fluid sprayed at the Jetport to ensure it doesn’t mix with storm water. Our partners at Inland Technologies have taken that process and worked with the FAA to be able to process the collected fluid, remanufacture it, and turn it into usable aircraft de-icing fluid.”

“This is the first facility of its kind in the United States and we are proud to say that with this expansion, we’re setting a new benchmark for winter operations sustainability,” says Roger Langille, Inland’s President and CEO.

Since Inland’s original facility opened in Portland six years ago they have collected nearly six million gallons of used aircraft de-icing fluid and processed it to remove the glycol and other contaminants. Nearly one million gallons of pure glycol have been recovered in this time. Inland’s facility will allow for the process to continue by creating new Type I Aircraft De-Icing Fluid that can be applied to aircraft.

Henry Laughlin, President of Northeast Air commented: “We are proud of our long-standing partnership with the Portland Jetport. Having operated from this location for almost 50 years, we have actively participated in the evolution of de-icing technology. Our introduction of AirFirst technology trucks significantly reduced the volume of glycol used in the overall process and our glycol blending system ensures minimal wastage. Today was a proud moment for myself and my team as we completed the circle through the application of recycled glycol using the worlds most advanced deicing equipment”.

Both Inland Technologies and the Portland International Jetport have a history of sustainable projects. Inland was the 2014 Maine Water Environment Associations Pre-Treatment Excellence Award. The Portland International Jetport was awarded the Airports Council International – North Americas Environmental Achievement Award in 2012 for the Geothermal Project associated with the new terminal. The Jetport also received the Airports Going Green Award in 2014 in recognition of the Terminal Expansion and the pursuit of sustainability within the aviation industry.

Media Availability at 11:45 AM today at the Inland Deicing Processing Facility 140 Jetport Blvd across from Hilton Garden Inn.  Paul Bradbury, Airport Director, and representatives from Inland Technologies and Northeast Air will be available to review deicing capture and reclamation process and allow ramp access to film active aircraft deicing operations.